The coronavirus pandemic has impacted so much of our lives this spring.

Many people who were staying at home and looking for things to do found they had time to plant a garden or devote more attention to their existing gardens this year. Some concerned about food supplies thought that vegetable gardens or planting more vegetables would be practical. Seeds were a little more hard to get early in the pandemic.

There have been a few others challenges this spring, too. April and much of May were cooler than usual. In fact, records were set in some parts of Central Pennsylvania for the coldest nighttime temperatures in May. It wasn’t unusual to hear from someone who said they lost plants and flowers to an overnight freeze.

An analysis by the National League of Cities found that Pennsylvania leads the nation in local government revenue loss due to the pandemic. Cities, boroughs, towns and townships across the state should brace for the impact of an overall loss of up to 40 percent of revenues.

Analysts say local governments are facing a financial crisis that will affect basic services, including critical resources like law enforcement, fire and other public safety positions.

Rick Schuettler is the executive director of the Pennsylvania Municipal League, he joins Smart Talk to spotlight the impact this will have on Pennsylvania municipalities and how the federal government could help.

Also, Smart Talk continues our conversations with Congressional candidates who have opponents in next Tuesday’s primary election.

Sarah Hammond is a Democrat running for the U.S. House of Representatives in the 11th Congressional District. The 11th district is made up of all of Lancaster County and the southern half of York County. Hammond is running against Paul Daigle in the Democratic primary. The winner will face incumbent Republican Lloyd Smucker in November.

When Pennsylvania initiated the state-wide, stay-at-home order the impact to the food supply system began immediately.

With restaurants and schools closed, suppliers began to experience a surplus of products that grocery store orders could not help to mitigate. There were even early reports of growers dumping product because of the lack of demand.

The Pennsylvania Department of Agriculture stepped in during the early phase of the crisis to establish policies and programs to limit food waste and support farmers with surplus agricultural products. Have the efforts paid off?

Pennsylvania Department of Agriculture Secretary Russell Redding joins us on Smart Talk Wednesday to discuss these programs and how the state is also focusing on Pennsylvanians who are food insecure.

Also, Smart Talk‘s coverage of the 2020 primary election continues. On Wednesday’s program, we’ll discuss issues with Democrat Tom Brier, who is running for the U.S. House of Representatives in the 10th Congressional District. The 10th District includes all of Dauphin County, the northern half of York County and eastern Cumberland County.

Pennsylvania’s June 2 primary election is just over a week away.

Smart Talk‘s Election 2020 coverage begins with conversations with two Congressional candidates. Both are Democrats and face a competitor in the primary. They are running in separate districts. The conversations focus on where the candidates stand on the issues.

Eugene DePasquale is running for the U.S. House of Representatives in the 10th Congressional District. The 10th district encompasses all of Dauphin County, the northern half of York County and eastern Cumberland County. DePasquale is running against Tom Brier in the Democratic primary. The winner will face incumbent Republican Scott Perry in November.

Paul Daigle is vying for the U.S. House of Representatives seat in the 11th Congressional District. The 11th district is made up of all of Lancaster County and the southern half of York County. Daigle is running against Sarah Hammond in the Democratic primary. The winner will face incumbent Republican Lloyd Smucker in November.

Friday is 143 Day in Pennsylvania. Inspired by Pennsylvania native Fred Rogers, Pennsylvanians are encouraged to share acts of kindness and good deeds for each other on 143 Day.

Mr. Rogers used 143 as a special code based on the number of letters to say I Love You.

To commemorate 143 Day, we’ll hear a special encore Smart Talk from Mr. Rogers hometown of Pittsburgh, focusing on his life and accomplishments.

The program was broadcast from the Senator John Heinz History Center. We discussed Fred Rogers’ legacy with several people who knew and worked with him, the history of the TV show and describe an exhibit at the History Center that includes Mr. Rogers’ living room and the Great Oak Tree, where Henrietta Pussycat and X the Owl lived.

Mr. Rogers’ Neighborhood was a different kind of TV show for children and it was made that way by Fred Rogers. Fred Rogers was a soft-spoken and gentle man who didn’t speak down to children. While kids were entertained, they also were learning valuable life lessons from Mr. Rogers.

At any given time, there are more than 100-thousand people waiting for an organ transplant. Every 10 minutes another person is added to the waiting list.

Wait times for transplants can vary, with the average time frame between three to five years – if you are fortunate. A little more than 50 percent of people on the waiting list receive an organ within that time frame.

Now, people needing transplants must contend with the impact of the coronavirus pandemic. It has created a worse situation where there just aren’t nearly enough donor organs available.

Rick Hasz is the Gift of Life Donor Program’s vice president of clinical services and he joins Smart Talk on Thursday to spotlight the shortages. He is joined by Geisinger kidney and liver transplant surgeon Dr. Michael Marvin, MD, along with Sarah Reesey, a Lancaster nurse and mother whose son is waiting for a heart transplant.

Local non-profits are using the COVID-19 situation to form response partnerships; a way to collate resources to optimize the impact.

The Foundation for Enhancing Communities and The United Way of the Capital Region have teamed up to establish a Community Response Fund partnership.

Finally, the coronavirus is affecting each one of us in different ways and has made connecting with friends and neighbors more challenging. Transforming Health’s Keira McGuire has been collecting stories about the impact and produced a program for WITF-TV – The Coronavirus Diaries. Keira joins Smart Talk to highlight the unique way the program was produced.

When the coronavirus pandemic gained a foothold in the U.S., hospitals that were concerned about having enough capacity to treat seriously ill COVID-19 patients began canceling elective procedures.

At the same time, some people who were worried about acquiring the virus avoided clinic and hospital visits over a fear of contagion.

The result of both actions is that patients may have delayed potentially life-saving care and diagnosis and hospital systems have lost critical revenue.

While there are many people in need of surgeries or other treatments put off during the COVID-19 pandemic, there are those in pain who are turning to opioids. So how to stop these indirect casualties of the pandemic? Appearing on Smart Talk to discuss is Dr. Asif Ilyas, MD, Orthopaedic Surgeon in the Philadelphia area, Director of the Rothman Opioid Foundation, Past President of the Pennsylvania Orthopaedic Society, Medical Director of the Rothman Orthopaedic Surgicenter, and Professor at Jefferson Medical College.

Also, last week Gov. Tom Wolf said the state would implement universal COVID-19 testing at Pennsylvania nursing homes; where more than two-thirds of deaths have occurred. An investigation by Spotlight PA found not all residents or staff will be tested and testing won’t be mandatory. Some are calling the plan insufficient and confusing. Spotlight PA reporter Aneri Pattani explains what she found on Wednesday’s Smart Talk.

As the coronavirus pandemic progressed in the US, education programs were impacted along with every other facet of society.

As schools closed and went online, it appeared that the instruction process would slow down in medical schools, too. Medical schools are, after all, part of medical centers that were ramping up for a COVID-19 response.

The Penn State College of Medicine saw opportunity in this challenge; expand education for medical students and harness the power of their skills, at the same time.

Joining Smart Talk on Tuesday to share how the college organized to enable students to contribute to the pandemic response are Dr. Jed Gonzalo, MD, associate professor of medicine and associate dean of health systems science education. He joins the program, along with medical students Caleb Frank and Lindsay Buzzelli.

Contact tracing is a disease control measure used by public health officials for many years to fight the spread of disease.

The process involves identifying people who may have come into contact with an infected person, then collecting information about them and who they may have encountered.

Contact tracing is labor intensive. It is also a key strategy to opening the economy and stopping the spread of the coronavirus.

Community health departments are well-versed in process of contact tracing and may be integral to any state-wide plan. Appearing on Smart Talk to talk about the details of contact tracing is Dr. Matthew Howie, MD, Medical Director, City of York Bureau of Health.

As two dozen Pennsylvania counties reopen, there are those living with a wide range of preexisting health conditions who are scared they won’t be protected when they go back to work.

With no guarantee that they can continue to collect unemployment if they refuse, this segment of workers face a near-impossible choice: Risk losing their jobs or losing their lives.

Transforming Health Reporter Brett Sholtis reports that the choice is especially risky for those with pre-existing conditions, like heart disease and chronic lung conditions.

He joins Smart Talk Monday to talk about the fear some have going back to work. Sholtis also reports on a letter filed last week by the state’s largest nurses union to the Department of Health with their concerns over PPE rationing. He’ll share that story, as well. 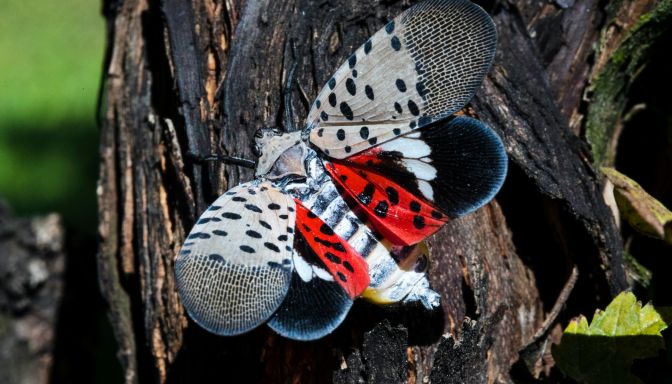 Agriculture officials appear on Smart Talk to make an unusual request of the public: while you’re home in quarantine, take some time to go outside and hunt Lanternflies!

Spotted Lanternfly: what to look for

Heather Leach, Penn State Extension Lanternfly office and Shannon Powers, Pennsylvania Department of Agriculture Spokesperson appear on Smart Talk to talk about what is at stake for Pennsylvania agriculture.

And now that the Pennsylvania Department of Health is looking more closely at coronavirus infections in nursing homes, families and advocates for Alzheimer’s patients urge policymakers to carefully consider this vulnerable group.

But when it was his own personal illness, finding answers seemed, at first, beyond reach.

Fajgenbaum went from being a healthy college athlete and undergrad to his death bed while in medical school. It was there he was diagnosed with a rare disorder called Castleman disease, an illness of the lymph nodes and related tissues.

While trying to perform research and save his own life, Fajgenbaum spearheaded a new approach that he says could play a significant role in treating other diseases like COVID-19.

Dr. David Fajgenbaum, MD, appears on Smart Talk  to talk about the method.

Summer is approaching and America’s love affair with the grill may be at risk. For several weeks now, there have been warnings that meat supplies could be affected by coronavirus outbreaks at meatpacking plants.

An industry slow-down appears to be happening, but what does that mean to the meat supply?

Dr. Jimmy Chen, Ph.D., Assistant Professor of Analytics & Operations Management with the Freeman College of Management at Bucknell University believes this may be short-lived, and possibly an opportunity for industry change.