First up, we have Republican state Representative Russ Diamond of Lebanon County who is sponsoring a bill that would elect judges by region, instead of statewide. We’ll also hear from Democratic state Senator Vince Hughes of Montgomery and Philadelphia counties, who is not a big fan of that idea.

Then we’ll hear from Spotlight PA investigative reporters Dan Simmons-Ritchie and Matt McKinney on two of their recent stories. Simmons-Ritchie looked into evidence of potential racial bias among state police officers, and asked the state police why they’re not tracking certain data on race. And McKinney investigated why the state Inspector General’s office bought a ton of guns, but can’t use them.

Finally, PA Post reporter Emily Previti explains why she’s been closely watching two court battles over voting machines—and why the machines in three counties are in legal limbo just a few months before the presidential primary.

Trump went on to win the election, which only a few polls indicated might happen. The election results left many questioning the value of election polls.

Experts caution that polls are often misunderstood and that they should be used as a snapshot, rather than a predictive tool.

Berwood Yost is the Director of the Center for Opinion Research at Franklin & Marshall College. The Center has published the results of the most recent election poll and Yost appears on Smart Talk to explain how this poll and others can be used effectively.

Where do Pennsylvanians stand on the candidates for president and several other issues? Yost analyzes the results of the latest F&M poll on Smart Talk.

A recent report by the U.S. Department of Health and Human Services Office of Inspector General found that Pennsylvania failed to properly monitor companies that work with people with intellectual disabilities. The Inspector General said critical incidents were not reported as required. Critical incidents involve things like abuse, neglect, an emergency room visit or the death of a person with an intellectual disability who receives Medicaid benefits.

In 2015 and 2016, two people died and the deaths weren’t reported. As a result, the state couldn’t follow up and law enforcement couldn’t investigate.

Also on Smart Talk – reflections on the life of former Harrisburg Mayor Stephen Reed who died last Saturday. Mayor Reed was arguably one of the most influential people in central Pennsylvania over the past 50 years. Sharing their thoughts are John Luciew, as a reporter with The Patriot News he covered Harrisburg during Reed’s tenure; Randy King, former press secretary for Reed; Fred Clark, former chair of the Harrisburg authority and former director of the Harrisburg Downtown Improvement District; Democratic State Representative Patty Kim of Dauphin County and a former Harrisburg City Councilwoman.

When Soviet soldiers entered the Auschwitz concentration camp in January 1945, it appeared empty at first; devoid of both guards and prisoners. That wasn’t the case.

The Nazis had evacuated most of the prisoners in their hurried departure, but left thousands who weren’t strong enough to survive the forced evacuation.

Auschwitz was located in German-occupied Poland and consisted of three different camps; a concentration camp, a labor camp, as well as gas chambers and a crematoria at Birkenau. It is estimated that more than 1.1 million people died there.

Before leaving Auschwitz the Nazis attempted to destroy evidence of the horrific crimes committed there. History would soon account for their actions and the Auschwitz-Birkenau “Death Factory” would become known as the most “notorious killing site of all time.

We’re joined on Tuesday’s Smart Talk by a Holocaust survivor and also hear why Holocaust education is so important.

Appearing on Smart Talk to reflect on the 75th anniversary of the liberation of Auschwitz are Linda Schwab, Holocaust survivor, Professor Neil Leifert, Director of the Center for Holocaust & Jewish Studies Penn State Harrisburg and Jeff Hawks, Education Director of the Army Heritage Center Foundation and State Coordinator, National History Day in Pennsylvania.

Citing a study that found that one million adult Pennsylvanians struggled with serious psychological distress at least once in 2015, the Wolf Administration has launched a new mental health initiative that includes more resources and public outreach.

Reach Out PA: Your Mental Health Matters is a multi-agency effort that aims to strengthen mental health care access, prepare state agencies and workers to help and reach out, increase the support and resources for children and young adults, and combat mental health stigmas.

The program is somewhat modeled after the state’s efforts to help those impacted by the opioid crisis.

For more on information on mental health, plus a deeper look at the changing tide of healthcare–check out WITF’s Transforming Health, a partnership of WITF, WellSpan Health and Capital Blue Cross.

Bloodhounds are recognized for their long, wrinkled faces and distinctive bark. But they are most prized for their ability to find what, or who, is lost.

Bloodhounds are considered one of the canine kingdoms most tenacious and gifted scent-finders. Summit Search and Rescue employs the breed to help track and locate missing people. The group is called by area law enforcement to help track missing children, hikers and even Alzheimer patients.

The Search and Rescue organization has realized that detective canines are also great therapy dogs, with special skill in putting kids at ease.

Appearing on Friday’s Smart Talk to highlight the talented breed are Terri Heck, Summit Search and Rescue president and K-9 handler, along with Detective Canine Briggs.

Also, enslaved people traveling north toward freedom are said to have used the the night sky to find their way. A newly installed art exhibit titled Finding Freedom is focusing on Lancaster’s location along the Underground Railroad and the use of the night sky as a guide for those seeking freedom.

Clark is a Professor of Art and the History of Art at Amherst College in Massachusetts, as well as a Distinguished Research Fellow in the School of the Arts at Virginia Commonwealth University in Richmond, VA. She also has a significant international exhibit record and two major exhibitions in Philadelphia that were featured in a New York Times article.

Sonya Clark is on Friday’s Smart Talk, along with Amy Moorefield, director of the Phillips Museum of Art, to discuss the exhibit at Franklin & Marshall College, Lancaster.

However, a year-long investigation by the non-profit newsroom Type Investigations and Los Angeles-based journalist and filmmaker Sara McClure found the Amish are hiding what they call a horrifying secret — that Amish children are being sexually abused by their family members and neighbors.

In an article that is published this month in Cosmopolitan Magazine, McClure writes that she identified 52 official cases of Amish girls and boys being sexually assaulted in seven states over the past two decades. The article also says that most often the sexual assaults are not reported to police, are kept quiet within the Amish community and that many times, the Amish side with the abuser rather than the victim of the assaults. 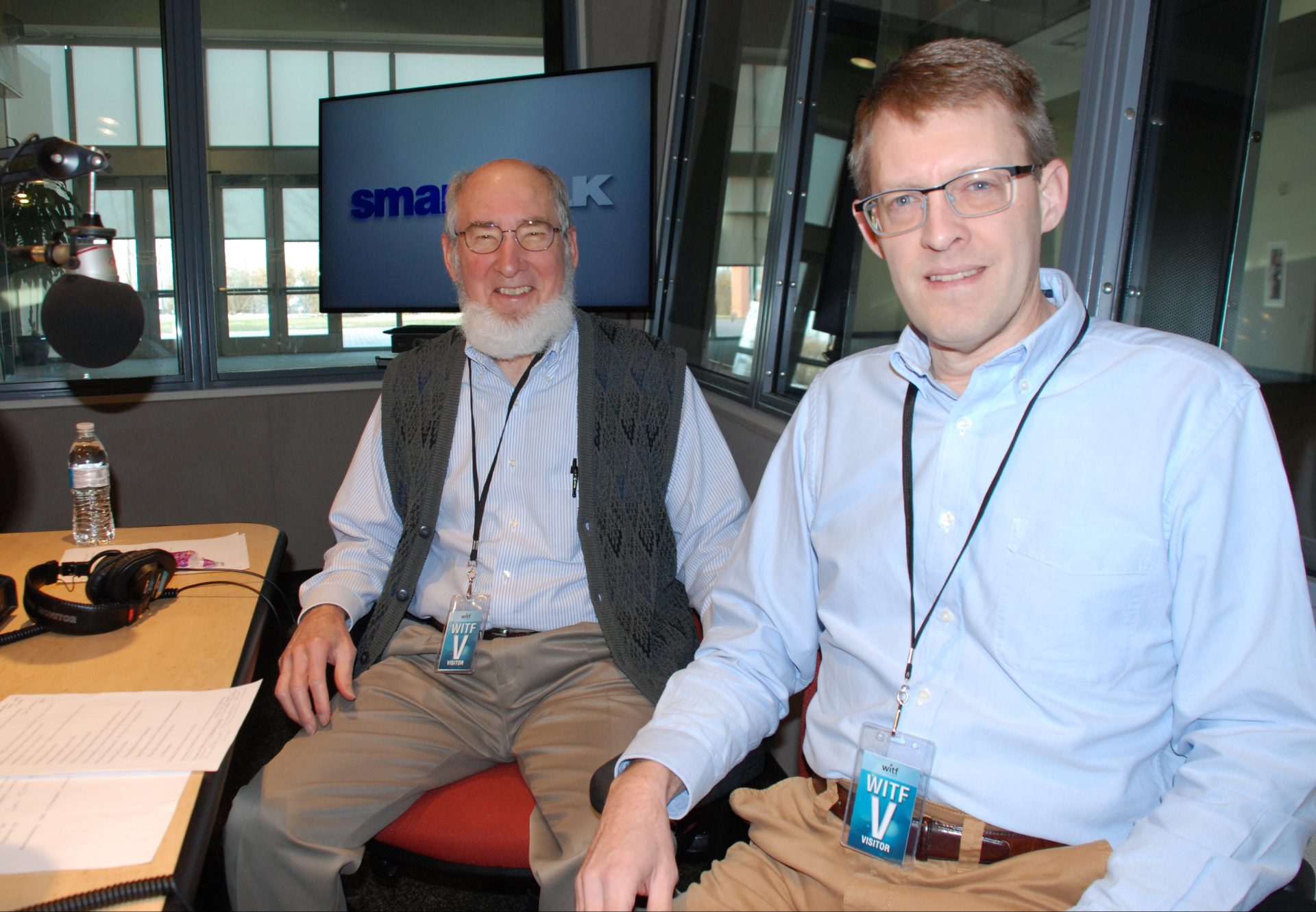 Book discussed on the program – For the Sake of a Child; Love, Safety, and Abuse in Our Plain Communities, Author: Allen Hoover, Dr. Jeanette Harder

Crime rates have dropped in Pennsylvania by 45% over the past 20 years. At the same time, Pennsylvania’s prison population fell by almost 1,500 last year — the biggest one-year decline ever.

Those numbers come from the Pennsylvania Department of Corrections.

Pennsylvania has been at the forefront of criminal justice reform over much of the past decade. Efforts have been made to being “smarter” on crime and punishment. That includes making sentences for those of convicted of breaking the law more in line with the seriousness of the offense, taking into account whether a crime was violent or not, helping non-violent offenders to assimilate back into society and getting away from mandatory sentencing laws.

Proposals are still being considered to reform probation rules. The number of people on probation in Pennsylvania ranks number five in the nation.

Pennsylvania’s Secretary of Corrections John Wetzel appears on Wednesday’s Smart Talk to discuss the crime and incarcerations rates, along with other issues.

The United States and China have been at odds over trade issues for the past several years. President Trump imposed tariffs on Chinese imports to the U.S., China then retaliated with their own tariffs on imports from the U.S.

The U.S. and China have finally found common ground and agreed on a Phase One trade deal.

The Phase One trade deal means an expansion of the United States’ agriculture and seafood exports, as well as China’s commitment to make substantial additional purchases from the U.S. over the next few years. However, American manufacturers, farmers, and consumers are still recovering from the impact of the tariffs imposed on them by China.

Also, all 3,150 photos of the Pennsylvanians who died in the Vietnam War have been found and added to the Vietnam Veterans Memorial Fund’s (VVMF) virtual Wall of Faces, including U.S. Air Force Master Sgt. Matthew Harris Jr., of Philadelphia — the last photo to be found.

Rick Hamp, special assistant to the Deputy Adjutant General for Veterans Affairs at the Pennsylvania Department of Military and Veteran Affairs, along with Vietnam Veterans Memorial Fund director of outreach Tim Tetz joins us on Smart Talk to discuss the virtual wall initiative.

Monday is Dr. Martin Luther King Jr. Day, when the life of America’s most influential and cherished civil rights leader is honored.

Dr. King’s dream of a nation where blacks and whites lived, worked and played together in harmony has never been fully realized. Racism is still alive and well in this country – maybe not in the same form as when King was campaigning for equal rights and justice, but minorities and white Americans often don’t look at things the same way. In fact, racism itself is one of the most difficult topics to discuss in this country.

On Monday’s Smart Talk, we’re joined by Dr. Amanda Kemp, Ph.D., a Lancaster activist, performer and author of Stop Being Afraid – 5 Steps to Transforming Your Conversations about Racism, along with Erika Fitz, editor of the book and Senior Trainer for the Racial Justice from the Heart workshops.

Also on Monday’s Smart Talk is a discussion of local African-American history — Harrisburg’s “Old Eighth Ward” was the center of the African-American community at the turn of the 20th Century. By mid-century it had shifted north in the city influenced by the expansion of the Capitol Complex.

Kristian Carter, 24, is researching the history of Harrisburg’s mid-20th-century African American business community, the remnants of which, the “Old Jackson House” and the Curtis Funeral Home, are well-known landmarks, long vacant, and now undergoing renovation, under the new brand “Jackson Square.”

Carter will appear on Smart Talk.

They will be giving a presentation at Historic Harrisburg on Monday, Jan. 27, at 6 p.m.