The husky, middle-aged man seems like he’d be brusque even without the beer. But with a brewski in hand, it’s impossible for him not to pepper an interview with expletives. Standing on a sidewalk in this small town along with thousands of other people, he describes what everyone came to see.. 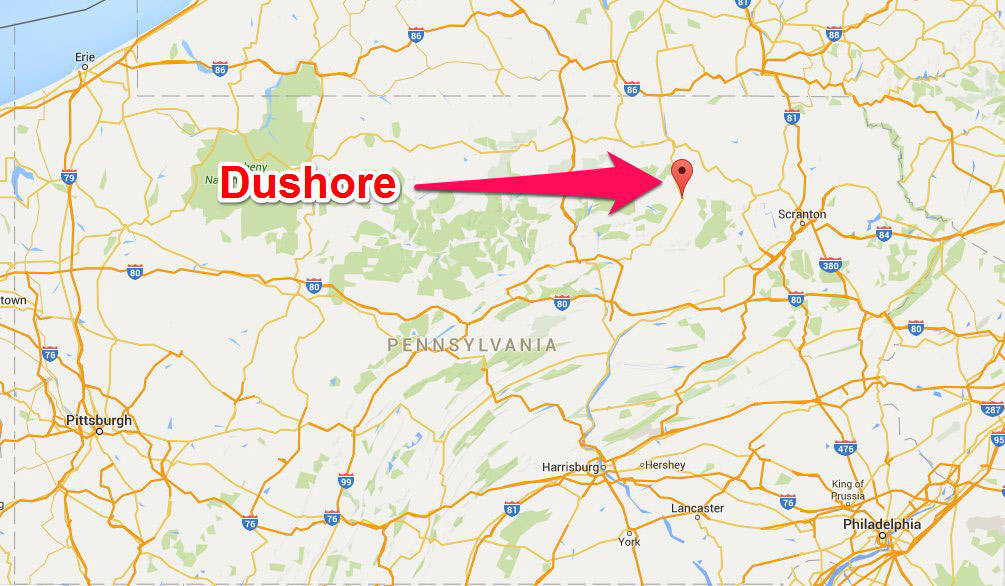 The outhouse races take place in Dushore, Pennsylvania, a town with a population of about 500. But every August during Dushore’s Founder’s Day celebration, anywhere from 3,000 to 5,000 men, women and children show up. When someone says that most of Sullivan County comes to the Outhouse Races, they’re not kidding: Sullivan County’s population is about 6,000. It’s the second least populous county in Pennsylvania. The big day starts out normal enough with the usual fare of clean, wholesome attractions like kids’ activities, fried foods and arts crafts. But at 7:00 p.m., it becomes a no-holds-barred party of potty humor, euphemisms and double entendre.

“One day I found a site for outhouses being raced on skies on a frozen lake,” says Spencer Davis, a member of the Dushore Lions club, the group that hosts the Founder’s Day celebration.

The outhouse races have evolved from something that was pretty dangerous to something that’s just kind of dangerous. “The first year we only had I believe five outhouses and there wasn’t really well defined construction rules and all that,” Spencer explains. “And we didn’t even think of steering so we had outhouses going all over the side of the road. So we tuned it up the second and third year and we included a steering wheel. And that really made the outhouses a lot safer because the kids pushing these outhouses were really flying especially coming down towards the finish line.”

“One time we had a senator from the federal government…(to his wife) ‘Who was that honey?’ (Republican Rick) Santorum came and presented the outhouse trophies one year.”

Back on Dushore’s Main Street an announcer on a PA system says, “This is the real deal. This is the 2015 Dushore Outhouse Races coming at you live in just under an hour.”

It’s 5:30pm and Maureen Sabia of Conshohocken is standing with a group of people a few blocks from Main Street. They are gathered around an outhouse. But it’s not her usual outhouse. “I guess in 2004 we came up and my dad needed a new chain for his chainsaw,” she says. “And we came in and it happened to be Founder’s Day.” The next year they came back with their outhouse called Pepe le Poopa. But…

“This year one of the helpers behind the scene, he scrapped our outhouse the month before,” says her father Donald Sabia. “I found out Monday we didn’t have an outhouse. If you don’t have the parts and all that you’re not building it in a couple hours so we didn’t have time so that’s why some of our team’s with Steiny this year.”

Steiny’s Heinys that is, which is the bright yellow outhouse with green letters that they’re all gathered around pre-race.

“So Pepe le Poopa is no longer,” says Maureen.

“No but we will be back next year,” Donald says.

An outhouse gets raced by a team of five people: four runners and one driver. While the materials and decorations can vary, there are a few musts when it comes to fabricating a racing outhouse. There’s a platform with three walls that have to be six feet tall. There must be a roof as well as a window in the back so the runners have at least a vague idea of where they’re going. The driver needs a seat, a seatbelt and a helmet. After that, self-expression takes control.

Just up the street from Steiny’s Heinys is another outhouse team who’s looking to…arrest the competition. Mike Boylan of Nazareth is with the Dushore Poolice, a team that has been in the races for about five years. He is animated as he describes the thought that goes into an outhouse design and how that plays into strategy.  “You’ll see some different variations. There’s another team locally that has a really creative one, ultra light. The whole entire frame is like aluminum bicycle framing so it’s really lightweight.” While the Poolice has won the race in the past, this year their game plan is different. “We used to have a bunch of high school track and field runners that would push this but they’re all in college now and they have jobs. So this year now we’re just showing up. So, it’s here again and people can see it again, but it won’t be as competitive necessarily as it used to be.” Make no mistake, the competition is real in the outhouse races, especially closer to the end. “They’re all athletes, really good guys, and they joke amongst each other. But when it gets down to the last couple of heats it gets actually very athletic,” Boylan says.

“We’re all in college and we all go our separate ways,” says Meredith, “but this weekend we all come back and hang out together. There is prize money, but there’s also the glory,” she says with a sarcastic glint in her eye.

“The Super Septic Suckers actually have a scholarship that they donate their prize money to,” says Justine.

When they tell their friends at college what it is they’re coming home for, “They think we’re weird,” Meredith says.

“They find it hard to believe,” adds Justine.

“They’re like all from the city and they can’t comprehend it.”

As the town clock tower strikes 7:00 p.m., the crowds clear off of Main Street and onto the sidewalks. Soon, colorful, wheeled outhouses begin to emerge from the bowels of Dushore’s side streets. An announcer warns the crowd to stay off the street during the races because it’s not unheard of for an outhouse to swerve dangerously close to the sidewalk. 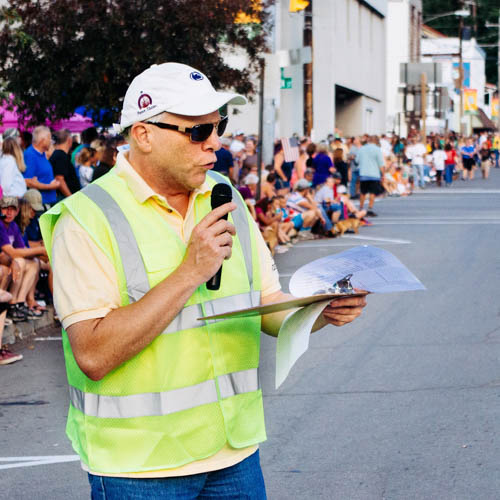 “Alright, so in our first qualifying heat,” the announcer says, “we have the Dushore Poolice versus The Perfect Dump.”

Sullivan County has only one traffic light and the outhouses will be racing through it. It’s at the intersection of Main Street and Route 220 but the town can’t shut it down for the whole event. So there are traffic guards waiting to close and open the road between heats.

They race two outhouses at a time. The track goes a few blocks in one direction, through the traffic light, around a monument that honors Dushore’s WWII veterans and then it comes back to the beginning. They have a staggered start to compensate for the slight difference in distance the two lanes take around the monument. The announcer assures the crowd that the two lanes have been meticulously measured for accuracy and fairness. 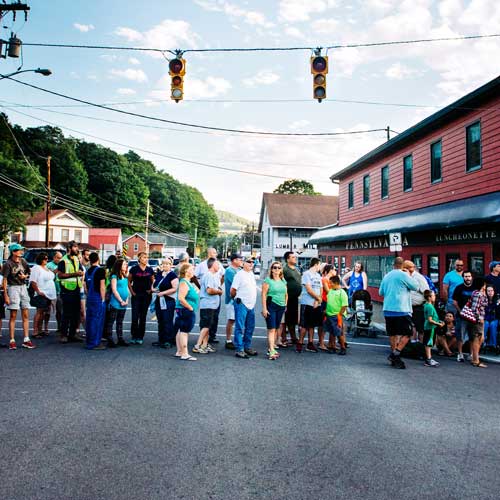 “Take it away Bob,” the announcer says.

Bob is holding a whistle. He shouts, “Three….two…one….” and then his whistle rings out amongst the cheering crowd as the eight runners launch the two outhouses down Main Street. The runners’ legs are synchronized as they whizz by which is strangely hypnotizing to watch, making the whole scene vaguely resemble a weird choreographed performance. The first-time outhouse race spectator’s mind continually fluctuates between a state of excitement and a kind of bemused incredulity, mixed with a dash of fear and a readiness to flee if an errant outhouse should come barreling towards the sidewalk.

“Oh, the Perfect Dump making a strong push around the monument and on their way down maintaining their lane,” the announcer shouts over the PA system. “Meanwhile the Poolice have a lot of ground to make up if they are going to catch the Perfect Dump.” 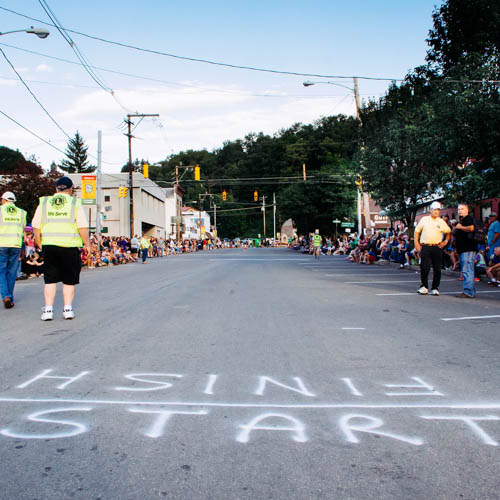 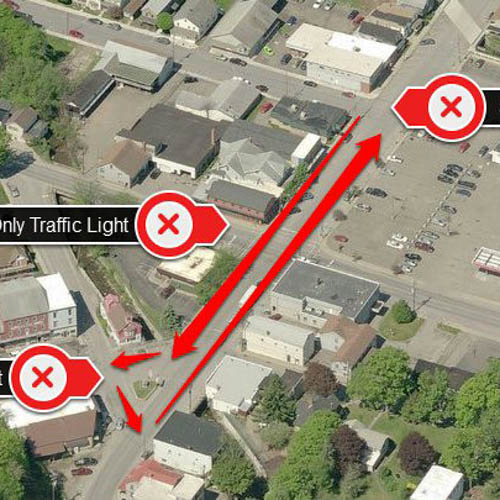 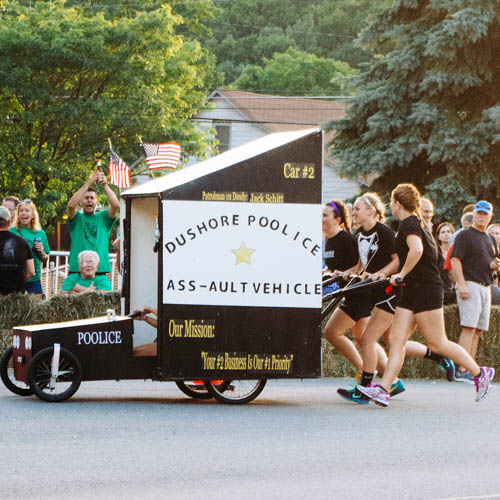 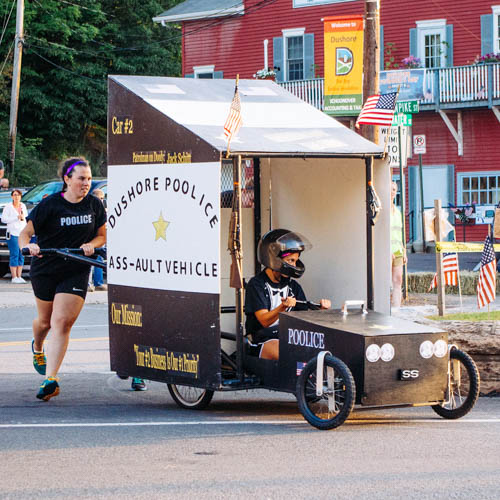 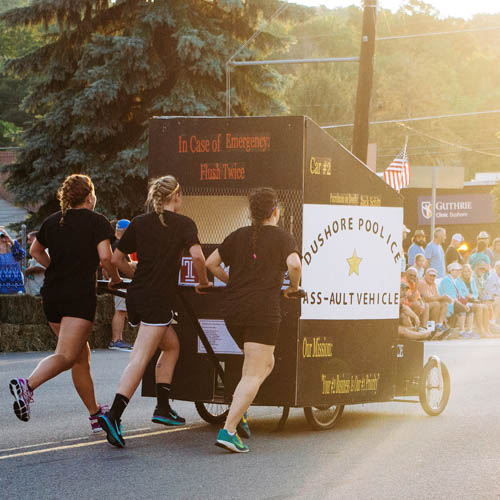 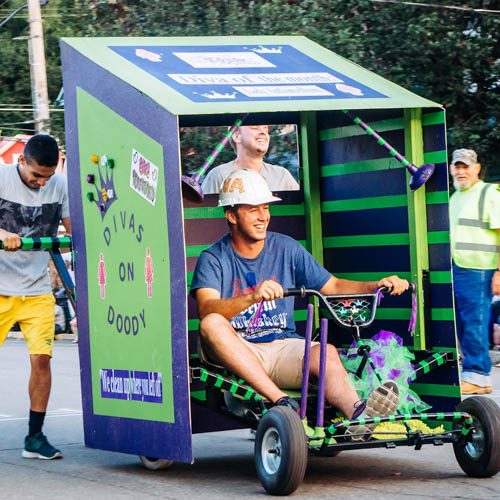 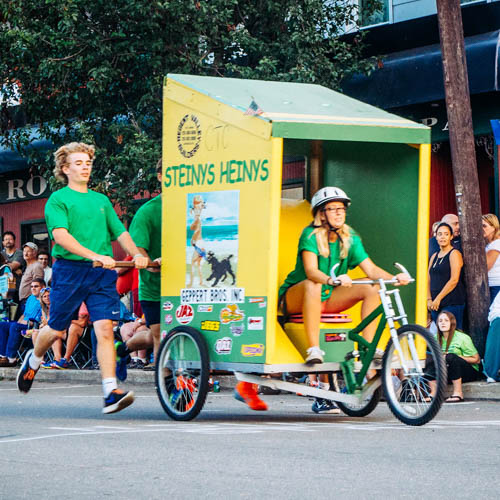 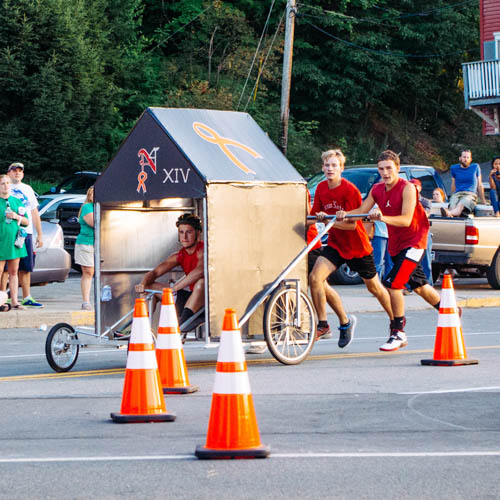 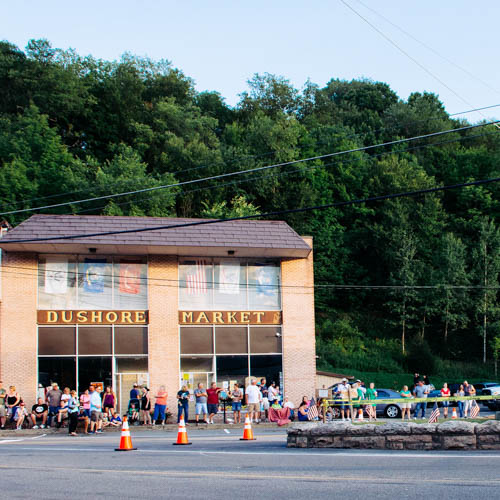 The outhouses pass a NAPA Auto Parts store. They pass Dushore’s local newspaper, The Sullivan Review, or “The Sully” as everyone here calls it. They also pass the Jolly Trolley, Dushore’s old-fashioned variety store and soda fountain which will house a collection of painted toilet seats. Fred Jugan, who lives in the town, explains how various artists paint the toilet seats which later get auctioned off. What’s unclear is what anyone who actually wins one of the toilet seats does with it.

The outhouse races are an example of how small-town culture can lead to some incomprehensibly weird customs and traditions, but as they manifest themselves, there’s an underlying reason for them. “It brings a lot of people into the area for Founder’s Day,” Spencer Davis explains. “It’s the parents and the grandparents and siblings and friends, aunts and uncles that are cheering on for the outhouse teams. There’s a lot of pride in ownership. Some of the fans have Super Septic Sucker shirts that they had done by one of the business here. It’s a camaraderie for people to get together. It’s a social thing.”

The outhouse races continue for about an hour or so. And while the novelty of the vehicles propels much of the popularity of the event, beyond that, it’s just a race like any other…well, except for all the euphemisms and double entendre that can be used while narrating the events. Which will most definitely be employed here:

The Perfect Dump did its business on The Poolice in the first heat. Divas on Doody got wiped out early on but smiled and tipped their hats to the crowd as they crossed the finish line. Red Rock Bears and the Super Septic Suckers both got pinched off while the Sexy Super Septic Suckers don’t even race anyone during their heat; they simple trotted their safari-themed outhouse around the track for the crowd to applaud and appreciate. In the end, Steiny’s Heinys squeezed out a third place win while Team Nutz flushed down a number two Second Super Septic Suckers and were relieved to have taken a number one.

“Team Nutz does it!” the announcer yells. “Team Nutz does it! Second Super Septic Suckers are the second place team! And there you see the outhouse racers sportsmanship, one of the finest hallmarks of this event. These guys appreciate what they do and the know how hard it is to run one of these things. It is fun to watch but it is not easy to do. Thank you for coming out and watching and we’re going to have the trophy presentations in just a couple of minutes.” 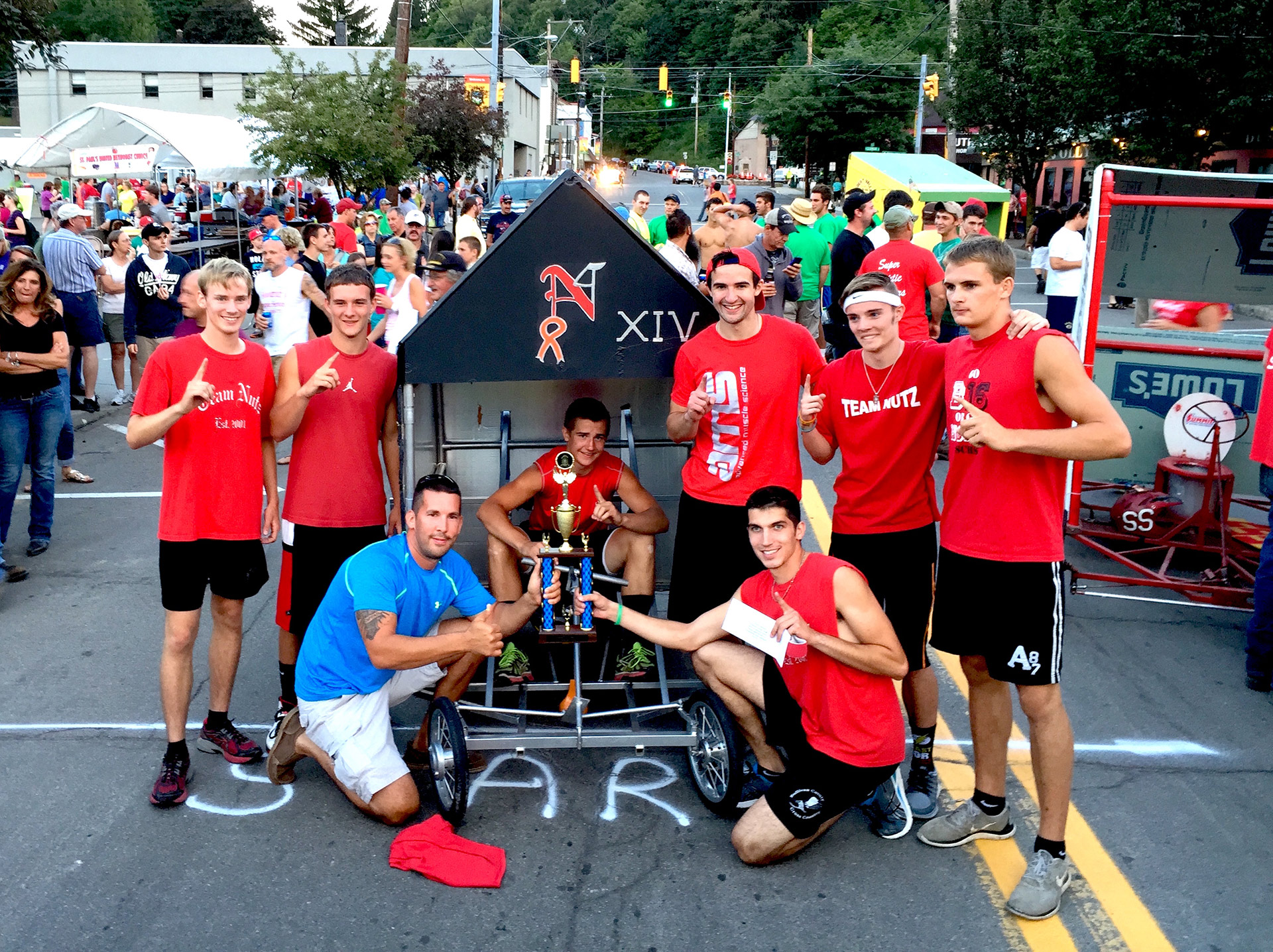 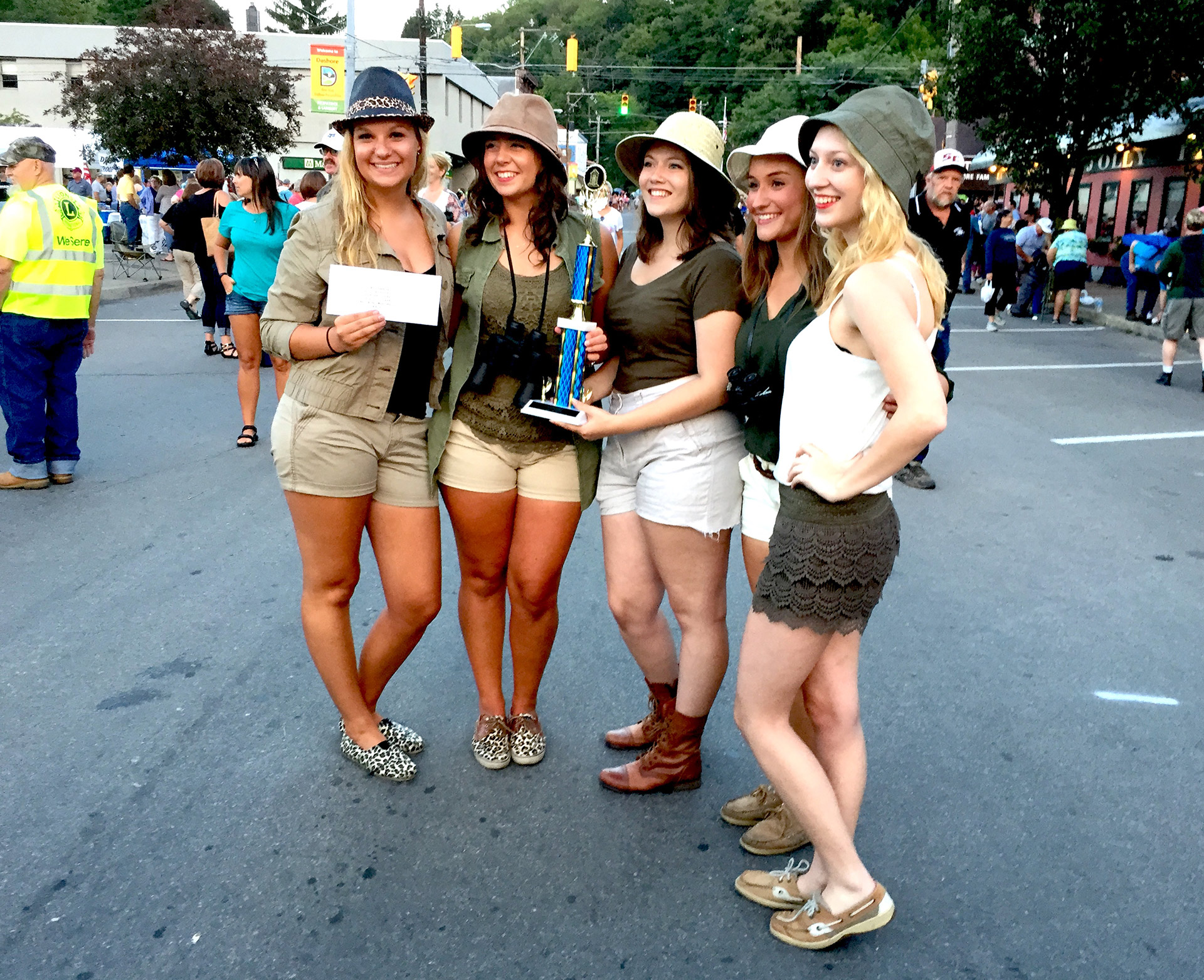 After the top three teams have received their trophies, the crowd votes for best-looking outhouse by cheering for their favorite. “Who says it’s Divas on Doody?” A lone woman somewhere screams. “Who says it is Steiny’s Heinys.” It’s hard to differentiate random drunken shouting in the distance from actual voting. “Who says it’s the Sexy Super Septic Suckers?” The entire crowd goes wild. “I think we have a winner,” the announcer laughs and they just cut the voting process short.

After the sun falls behind the hills surrounding Dushore, Main Street is blanketed in dusk. Crowds and outhouses fill the streets as pickup trucks crawl their way through the throng to transport their creations in trailers and pickup beds back to wherever it is racing outhouses come from. Walking down a side street back to a parking lot is a group of boisterous and drunk outhouse racers.

“Look look!” one guy shouts. “His buddy’s throwing up!” He points to a man hunched over with his face in someone’s bushes. “He’s feeding the rabbits! He’s coughing up his cookies! Dushore!”

Incredibly, there’s not a single outhouse nearby. But the side streets are now filled with people heading back home as this quiet mountain town relieves itself of yet another year of the Dushore Outhouse Races.